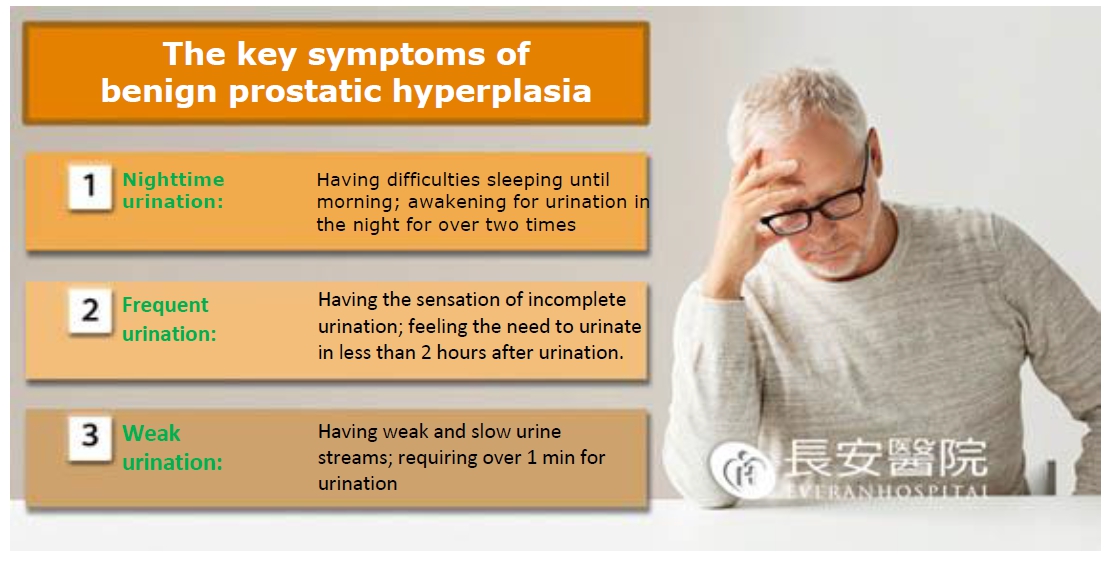 ※ If you have the problems listed above, please seek the help of physicians.

Many men over the age of 50 have benign prostatic hyperplasia problems. They often have to stand for a long time in front of a toilet to urinate and experience frequent nighttime urinations at night. Although they might have thought about performing prostate surgery to settle the problems once and for all, they were worried that the side effects would affect sexual functions, resulting in a repeating delay, worsening the problems of benign prostatic hyperplasia.


49-year-old Mr. Hsieh from Miaoli has been treated with medication for four years for benign prostatic hyperplasia without obvious effects; he even developed side effects such as frequent dizziness. Moreover, due to benign prostatic hyperplasia, he could not clear out bladder stones, which resulted in recurring bladder stone problems. He was once suggested by a physician to receive prostate surgery; however, considering his own young age and fearing that the side effects of surgery would affect sexual functions, he could not help but hesitate.


Later, Mr. Hsieh searched for and found the non-surgical and non-sexual function-affecting benign prostatic hyperplasia treatment, prostate arterial embolization, on the Internet. He traveled enthusiastically all the way from Miaoli to Everan Hospital in Taichung for cardiovascular outpatient consultation. After examinations, it was observed that his prostate had reached a weight of 70 g, and treatment schedules were arranged for. As the procedure included speedy hemostasis and was an outpatient operation, there was no need for post-surgery bedrest, and it was more effortless compared with traditional surgery techniques; Mr. Hsieh was able to return home on the very day of the surgery. When returning to the clinic on the following week, he said that his symptoms had improved a lot and did not even affect his sexual functions, which brought him much happiness.

The prostate of a young man is about the size of a walnut, weighing approximately 20 g. But, through aging, around at 50 years old, the prostate will become enlarged due to proliferation of the prostate tissue. There are various factors, such as genetics, that contribute to the progression of benign prostatic hyperplasia; age is the most important among these factors while diet and lifestyle habits are also closely associated. According to medical studies, people who prefer to eat meat or high-fat foods, especially those who are obese and lack of exercise, have a higher incident rate of benign prostatic hyperplasia or even prostate cancer.

Benign prostatic hyperplasia is treated mainly through drugs and surgeries. In the latest treatment option, prostatic arterial embolization, a microcatheter is placed into a small artery of the prostate for the embolizing microspheres to be injected into the prostate, blocking the prostate arteries, which then results in ischemia of the enlarged prostate and shrinking, achieving a reduction of the prostate volume and urinary tract obstructions. Being an outpatient surgery that does not require general anesthesia and does not affect sexual function, it provides patients with benign prostatic hyperplasia with a new option.

Not suitable for: people with severely impaired renal functions or people allergic to imaging agents.

★If there are any problems about benign prostatic hyperplasia, please call:
The Cardiovascular Center: (04)-36113599
Professional consultation hotline: 0909-264-006